Can Parasitic Birds Help Us Conserve the Environment?
Do you want to become an ornithologist? What this video!!

Did you know that some birds are parasites? Very intriguing idea, isn't it?

There are many different types of birds that are parasites.  In fact, there are over  90 species of them! Unlike many commonly known parasites such as fleas, ticks, and bedbugs, however, birds don't harm their hosts by burrowing inside the skin or hiding between feathers.  Instead, they lay their eggs in the hosts' nests and leave the raising of parasitic offspring to foster parents.  Such birds take advantage of the hosts' parental instincts at the cost of the foster parents' own brood, and so, appropriately, are also called brood parasites.  The best known brood parasites are cuckoos in Europe and brown-headed cowbirds in North America. Interestingly, North American cuckoos, including roadrunners, typically build their own nest, hence it is only possible that "One flewover the cuckoo's nest".... 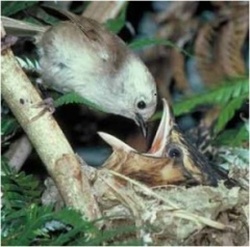 Photo: New Zealand Whitehead feeding a Long-tailed Cuckoo.
The foster parenting arrangement is not an entirely friendly process. The chicks of cuckoos and cowbirds, once hatched, grow much bigger and much hungrier than their step-siblings.  In order to get a bigger share of the food that their step-parents bring home, cuckoos resort to pushing their nestmates (either as eggs or as nestlings) out of the nest.  Cuckoo chicks grow so big, that they often barely fit in the nest and are twice the size of the step-parent!

The host birds that become involuntary step-parents to cuckoos, cowbirds, and parasitic finches in Africa are typically small insect-eating songbirds. 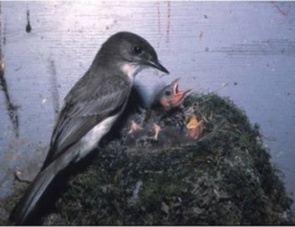 Photo: Eastern Phoebe feeding a brood of own and Brown-headed Cowbird chicks.
Feasible locations of suitable host nests, the hosts nest-building acumen, and general parenting skills are observed by the parasitic birds and compared to other potential parents in the area. After a cuckoo or a cowbird is satisfied that her egg will receive the loving care it needs with a particular pair, she lays the egg.  After that, the cuckoo or a cowbird has no regular contact with its chick, leaving this responsibility to the chosen step-parents.

Caring for another bird's chick is a heavy burden.  The parasitic chicks eat more than their share, and as a result, their step-brothers and step-sisters get less, and grow smaller than their usual size.
Some of the hosts developed ways to protect their young from being taken advantage of by the brood parasitic birds.  Some, like chaffinches in Europe and American robins in North America, immediately recognize eggs that are not theirs and destroy them by grasping them,  puncturing them with their beaks, or pushing them out of their nests. Others, like eastern phoebes nesting under the eaves of many homes in eastern North America, are more tolerant toward the intruder eggs, and typically sit on the eggs and raise the step-child (or multiple step-children) as their own.

Photo: Parasitic chicks sometimes eliminate their competition, when they push their step-siblings out of the nest and end up claiming all the food for themselves.
One might wonder how it happened that some birds exploit others and why the host birds are allowing the exploitation.  The host birds do suffer and, in evolutionary terms, lose fitness, because of the actions of parasites: hosts' own chicks are smaller, weaker, fewer, and have less chance for survival. In some cases, parasitic birds, by installing their eggs in the hosts' nests, contribute to decline of rare and endangered host species. Yet, both host birds and brood parasites are an important part of the ecosystem and biodiversity. Brood parasitic birds, including brown-headed cowbirds, are native to much of North America, and represent a unique component of the local biodiversity through their unusual reproductive strategies and one of the few instances among birds where brood parasitism has evolved. Migratory cowbirds are also protected under the Federal Migratory Bird Act, and so their eggs, young, and adults must not be destroyed. 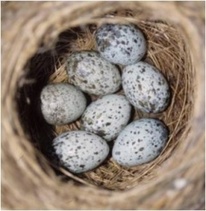 Photo: Clutch of Great Reed Warbler parasitized by Common Cuckoo.
On the surface, the cowbird looks like other blackbirds and orioles. But the brain, the hormones, and the behavioral strategies of the cowbirds are nothing like those of other species. How natural selection has generated the brood parasitic reproductive strategy and why many hosts tolerate brood parasitic eggs and young continues to puzzle scientists. Animal behaviorists, for example, compare different species of hosts and parasites and look at the ways they have co-adapted to each other's behaviors in their particular environment. Others use instruments to measure the colors of the eggs with a spectrometer, analyze the chemical content of the eggshells, introduce artificial eggs of diverse colors into the nests of typical and rare hosts, and observe, measure, and compare these animals' responses. Sensory ecologists identify the function and contrast of different items: eggs, nest linings, and the objects that humans discard, such as cigarette butts, that birds use as building materials. 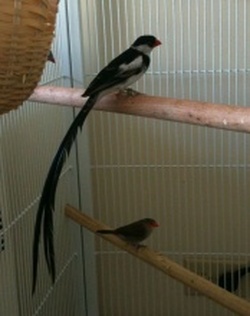 Photo: Whydah, one of parasitic birds. Males grow their long tails only during breeding season.
Evolutionary biologists record the changes that take place in different generations of birds and use mathematical models to study the interactions between different species and strategies. Conservation scientists recommend changes, management options, and policies, such as relocation/elimination of introduced species to allow the original ecosystem to recover and thrive.

Although human-induced changes in the ecosystem often affect animals more than they affect humans, we are also a part of that ecosystem and it is in our best interest to preserve the richness and diversity of life. All of us, evolutionary and behavioral ecologists, student and citizen scientists, and the interested public, are and shall be working together to discover and recognize the ways animals contribute to the maintenance of our ecosystem, and to recognize them as an essential element of the human experience on this planet.

We invite you to explore this webpage and the information and resources we have compiled. We hope you will enjoy finding out more about the brood parasites and their hosts, how we do research, and how we work to restore and maintain ecosystem health and behavioral diversity.